On Thursday, March 7, we held our annual event, Game Changers: A Year in Review—a combination of our Annual Meeting and 2018 Campaign Celebration—at the Cedar Rapids Marriott. The event recognized individuals and organizations that are dedicated to making a difference in our community and highlighted last year’s events and campaign.

Tim also recognized Jack Evans and The Hall-Perrine Foundation for their support over the years to UWECI. For the 2018 Campaign, the Foundation made an even greater commitment with a campaign matching challenge grant of $100,000!

Last year’s campaign co-chairs, Darrel, Paul, and Andrew Morf shared a glimpse at how the 2018 Campaign made an impact on our community:

All of this success led to more than $8.6 million being directly invested into East Central Iowa in both dollars and volunteer time! 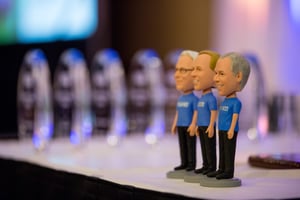 The Morfs then announced this year’s Campaign Award winners—congratulations to the following companies & their campaign coordinators!

To wrap up the event, we introduced our incoming campaign co-chairs—Brad Buck, Noreen Bush, and Rod Dooley from the Cedar Rapids School District! We are excited to have them on board to lead the charge next year for United Way.

Thank you all for your support and joining the fight for our community. Together, we will continue to act as game changers and work to break the cycle of poverty in East Central Iowa.