The Difference Diapers Can Make

Learn more about a community collaboration in East Central Iowa that serves our community’s youngest individuals.

Did you know the average cost of a month’s worth of diapers for one child is $80? Diapers are a basic need for all babies, but unfortunately, not everyone can afford this cost. For these families, a lack of diapers can make the difference between taking a child to daycare, putting food on the table, paying bills, and taking care of other basic life necessities. Two organizations in East Central Iowa are currently working together to ensure that every family has access to the diapers their child needs. 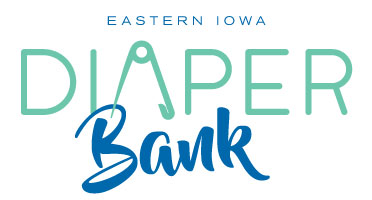 Eastern Iowa Health Center (EIHC) and Young Parents Network (YPN)—two of United Way of East Central Iowa’s funded partners-- in Cedar Rapids. Because EIHC does a lot of prenatal care for mothers insured with Medicaid, and because diapers are expensive to purchase, they discovered a need for a diaper bank. Erin Langdon, Chief Development Officer with EIHC, started collaborating with YPN to establish this community resource.

“We knew we could reach more people through collaborating and doing work together, rather than trying to start one on our own” Langdon said.

EIDB, which is a member of the National Diaper Bank Network, is an incentive-based program for parents in the community to do healthy activities for their families. Through attending doctor’s appointments, participating in parenting groups, and completing other activities, participants can earn “cash” to get diapers for their children. Having access to these diapers improves physical, mental, and economic well-being of babies and their families.

Since the bank started, it has served over 2,400 families. In its first year of operation, 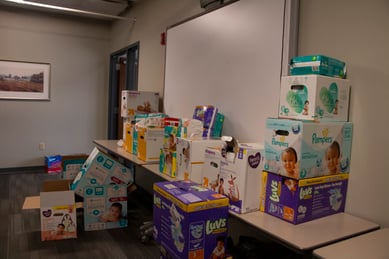 Over her time working with the diaper bank, Langdon has seen how it has made a difference for numerous families in the community. She recalls a single mother who signed up for the program shortly after she discovered she was pregnant. She earned diapers every month throughout her pregnancy and participated in parenting groups and other activities to earn more points for diapers. Once her baby was born, the mother had earned enough diapers to last until her child was nine months old. Because of the diaper bank, the new mother was able to take care of other basic needs, such as housing and bills, and not worry about the cost of diapers.

Since the start of the COVID-19 pandemic, the bank has seen an increase in the number of families they’ve served, as it is now open to those outside of the program. A recent diaper drive, hosted by UWECI’s Women United, has provided over 65,000 diapers to the bank so far. The bank is continuing to accept unopened packages of diapers in all sizes. Donating, participating in future diaper drives, and spreading the word on social media are all ways to support the bank, Langdon said.