Supporting Iowa Farmers, One Meal At A Time

“Farmers are a vital part of the agriculture system in our country, especially in Eastern Iowa. 2020 was a difficult year for farmers, made more difficult by the pandemic and derecho. Many farmers suffered the loss of buildings, crops, livestock and some even lost their homes. Several organizations in Eastern Iowa have put a priority on farmer outreach this year to support the community.

Iowa State University Extension and Outreach is one example of this, with their development of the Thank a Farmer campaign. Staff were alerted to an article where a farmer explained his experience in losing two friends in the farming community to suicide. The takeaway from the article was simple: “if you want to support us [farmers], thank us”. 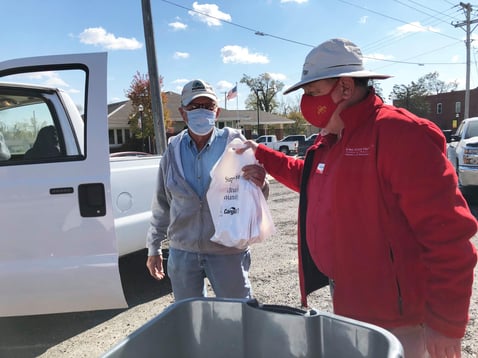 Regional Director at ISU Extension and Outreach. “We had hundreds of youth make thank you cards and raise funds to provide safety items, nutritious snacks, and stress management education to farmers.”

Over time, the Thank a Farmer campaign grew, and the idea of providing meals to farmers was able to come to fruition as funding became available. After the derecho hit, Gordon knew this support was needed more than ever.

“Being with our farmers, in person, was going to be very important in demonstrating support,” Gordon explained. “Providing a meal to farmers who work hard to provide food for us seemed like a great way to show we cared.”

After the derecho, United Way of East Central Iowa (UWECI) designated $25,000 of a $75,000 Disaster Fund contribution from Cargill to ISU Extension and Outreach to support rural farmers through UWECI’s Cultivating Community strategy. Since the start of Farmer Appreciation Fridays, which provide meals and support to farmers in the area, over 450 individuals have been served at 7 locations in Linn and Benton Counties.

Along with supporting farmers through Farmer Appreciation Fridays, ISU Extension also supports women in the agriculture business and farming community. The first multi-county Women in Agriculture event was held in March to seek input and feedback from women in multiple roles: landowners or future landowners, spouses of full-time farmers, and women involved in the operations of their family farm.

“Women bear a great deal of responsibility for supporting their spouses during stressful times,” Gordon said. “We hope that the peer support provided at these events will also support the spouses in their lives.”

As Gordon and ISU Extension look to the future, the stories and feedback they have received from area farmers keeps them motivated to push forward and support more individuals. Gordon fondly remembers a woman from Central City who shared some of the challenges she had experienced since the derecho. She and her husband lost a lot of crops and buildings and were staying with their daughter out of town because their home was uninhabitable. She shared that the event meant a lot to her, especially during such a challenging time.

“What meant the most to us all was seeing our local farmers being together and getting support but also supporting each other,” Gordon said. “To see them smiling really meant more than we can say, and we likely will never know the true impact of this kind of support to this community during such a difficult time.”