As a long-time supporter of United Way, Women’s Leadership Initiative (WLI) captured my attention during the 2011 campaign. Through WLI, I learned about women in our community who had health issues but couldn’t afford health insurance. Often, the women were employed, but their income was too high to qualify for state coverage; essentially, they were stuck. WLI came up with solutions to help these women and started the ball rolling to get them assistance.

This past year, our daughter, Kimber, needed medical assistance for a high-risk pregnancy. However, the health insurance she had through her employer experienced a lapse in coverage. United Way’s WLI and Eastern Iowa Health Center (EIHC) assisted her by filling in the gaps until her insurance became active again. I wasn’t even aware she had received assistance until
she asked me to tour the birthing unit with her. That’s when Kimber told me that United Way helped her get the care she needed throughout her pregnancy. Especially in that moment, I was very proud to be part of WLI and United Way.

I didn’t know my own family would need services offered by United Way and its partners when my husband, Kent, and I started our journey as donors all those years ago. What we did know is that contributing to those in need was necessary for us. We are so grateful for the generosity from United Way, WLI, and EIHC.

Thank you from all of us! 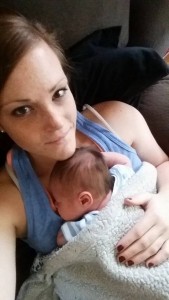 I wanted to say a big thank you to United Way and WLI for helping my daughter during her pregnancy. I am happy to say that she and her significant other, David, had a healthy baby boy and named him Jaxson Lee Wortman (Jax for short). Here is a picture of the new little guy!

How can you help?